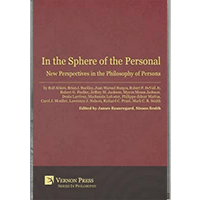 by Rolf Ahlers, James Beauregard, Brian J Buckley, Juan Manuel Burgos, Moeller Carol, Robert F. Devall Jr., Robert G. Feidler, Myron M. Jackson, Jeffrey M. Jackson, Denis Larrivee, Mackenzie Lefoster, Lawrence J. Nelson, Mark Smith, Richard Prust, Philippe – Edner Marius
James Beauregard, Simon Smith (Eds.)
The papers in this collection were originally presented at the 13th International Conference on Persons, held at the University of Boston in August 2015. This biennial event, founded by Thomas O. Buford and Charles Conti in 1989, attracts a host of international scholars, both the venerable and the aspiring. It is widely regarded as the premier event for those whose research concerns the philosophical tradition known as ‘personalism’.
That tradition is, perhaps, best known today in its American and European manifestations, although there remains a small but fiercely defended stronghold in Britain. Personalism is not an exclusively Western development, however; its roots are also found in India, China, and Japan.
What unites these disparate intellectual cultures may seem quite small. There is little, if any, methodological or doctrinal consensus among them. They are all, however, responses to the impersonal and depersonalising forces perceived to be at work in philosophy, theology, and, most recently, the natural and political sciences. Their common aim is to place persons at the heart of these discourses, to defend the idea that persons are the metaphysical, epistemological, and moral ‘bottom line’, the vital clue to knowledge of self, reality, and all conceivable values.
Beauregard and Smith are project managers and general editors of the forthcoming Internet Encyclopedia of Personalism, a peer-reviewed, open-access resource for scholars and students with an interest in the field of Personalism
Juan Manuel Burgos2018-02-26T13:09:32+02:0015/09/2016|Categorías: Libros de temática personalista|